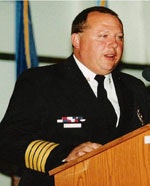 Just prior to rejoining the International Association of Fire Chiefs, Rob Brown served for two years as the Chief Regional Coordinator for the Virginia Department of Emergency Management, overseeing emergency management and homeland security in Northern Virginia and the National Capital Region (Washington, DC) for the Virginia Secretary of Public Safety and Homeland Security.